The Monthly Review, or Literary Journal  vol 102, of 1823, quoting ‘Adams on the Country about Cape Palmas’, says that “Captain Adams calls Malemba the Montpelier of Africa, and thus enumerates its local advantages … climate, when compared with that of any other part of Africa which I have visited, is very salubrious, owing to the dryness of the atmosphere and soil, and the absence of those deep forests so common in other districts.” Malemba is (or was) near Cabinda. This reference is repeatedly quoted in other 19th century works. 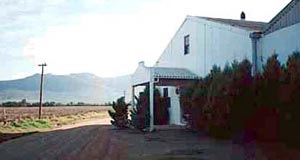 Tulbagh (between Wellington and Piketberg), Cape Province (30-14S, 25-52E). Deed for the land (50 morgens of alluvial soil on the banks of the Klein Berg river) was signed in 1714, the first owner being Jean Joubert, a Huguenot refugee from and native of Montpellier, France, who named his new farm after it. In the late 1990s it was a vineyard, run by Mr De Wet Theron, whose family acquired the farm in 1778, but it seems recently to have ceased production, at least under this name. Wine was officially first produced here shortly before the end of the 19th century.

(Thanks to Sean Kriegler of Participation Adventure Tours for much of this info.)

Morningside, Durban. Undated. Location of several businesses, as well as the Durban Area School of Philosophy at number 200. Given the Morningside location, does this echo one of the Edinburgh Montpeliers?