An example of the ‘Montpelier comparison’ occasioned by the opening of the Royal Hotel, Port Macquarie:
‘The hotel opened with some fanfare on 1 July 1841 with the Australian  newspaper in Sydney pronouncing Port Macquarie an unrivalled health resort, the Montpellier of New South Wales...." (Ferry and Messner).’ 'The comfort and luxuries, if you visit the Hotel Royal, will render it MONTPELIER itself.' [also 1841]

The 1872 Post Office directory for Sydney lists a Mount Pellier at Picton, 52 miles south of Sydney. It appears to have been a farm or similar settlement - 3 farmers and one labourer are listed here.

Near Brisbane. In existence by 1916 (home address of WW1 serviceman). Judging by the zip code, seemingly the same as Montpelier Road, Newstead 4006

Existing by 1952, when a resident, Betty Shanks, was the victim of a still-unsolved murder.

Street in suburbs of Brisbane; mostly residential with some businesses listed.

A street in Port Elliot town centre, on the Fleurieu peninsula to the south of Adelaide.

Reference in 1885 newspaper account of a disorderly house being kept there.

This is Australia's oldest surviving colonial village, and the street today has a number of tourist hotels and the like. Earliest buildings here were of c1831, though the road did not exist until a few years after. It seems always to have been so named. The name is not definitely resolved, but the element Retreat does not seem well explained by the site, and appears certain to be linked (through a migrant?) with the only other occurrence, Montpellier Retreat in Cheltenham, a row of villas started in 1824 and largely completed in the 1830s.

An early feature of the street was the Montpellier Retreat Inn. In the 1850s, there was shortage of official copper coins in Australia, and various enterprises took to issuing penny and halfpenny tokens. W D Wood, proprietor of the inn at that time, was one such trader, with the result that we have a good image of the inn as it appeared then, complete with the mast of a sailing ship in the background. 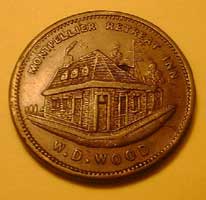 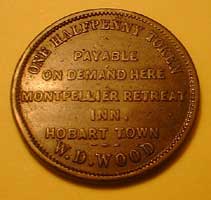 The same building, a century later, is seen in a 1950s watercolour by Harold Buckie.

When the developer's family first came from England (date uncertain) to farm at Westbury near Launceston, they named their property Montpelier, a name 'related to their northern English origin'. If this story is accurate, it may perhaps be a reference to Harrogate.

Whatever the origin, the Tasmanian examples probably take the prize for being the furthest from France.

Sketch from The early days of Highton, Geelong Historical Society, 1982

The Montpelier subdivision is said to have been named after the French town by wine growers who migrated from there; in older records the French two-L spelling is used. The estate was probably so named by the 1840s. When sold in 1892, it was described as a 'beautiful estate situated upon a prominent spur of the far-famed Barrabool Hills'.

Wine growing thrived in the early days of Geelong, from the 1840s onwards, until the arrival of the phylloxera virus in the 1860s. Among the vineyards was the Geelong Vineyard Company, which began operations in 1863. Its land included 27 acres near Montpellier. 22 acres were planted with vines, chiefly hermitage, chasselas and burgundy. However, the company was not successful, and 5 years later, in 1868, the Montpellier property was offered for sale. The property was described as "within three miles of the Market Square, opposite and adjoining the celebrated estate of Montpellier, the residence of the late John Highett, Esq" (Highett had died in January 1867). It sold in four lots. The following summer, phylloxera was being reported in the area.

The Montpellier land had first been bought by C Hutton, who paid £1638 for a mile-square lot just west of the Geelong town boundary in 1840. It is not certain when the Montpellier name was first applied. The Highett house seems at one point to have been known as Highton House; at one stage it was a public house kept by a Mr Lewis, but the date of this is uncertain. A sale notice of 1892 for the Montpellier Estate suggests its situation may also have been an influence on the name: "This beautiful Estate is situated upon a prominent spur of the far-famed Barrabool Hills. The spacious, substantial and stately residence is one of the most conspicuous objects which catches the eye of an observer glancing in the direction of the beautiful village of Highton, from any of the more elevated sites in Geelong. It contains 10 rooms, servants' rooms and kitchen, with large verandah and cellar ...the whole crowning a green hill of a very commanding position."

The house and grounds stood on a 27-acre lot, and five further lots on the estate totalled 126 acres.

Thanks to Mrs Dianne Hughes of the Geelong Historic Records Centre for this information.

The Bread of Life Church is situated at no. 17 Montpellier Crescent, Lower Templestowe.