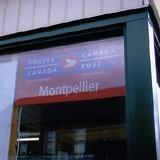 About 50 miles north-east of Ottawa. Has a population of 3,000 and a golf course. A post office opened here in 1889, taking its name after Louis Montpellier, the postmaster. He was a general merchant who made cheese and owned a cheese factory. The post office was on a farm in 1892 but moved to a spot 11km north of Ripon in 1902.

The municipalité of Montpellier took its name from the post office, and was established in 1920 by the merger of Ripon, Hartwell, Mulgrave and Lathbury. (Montpellier as a surname was established in Canada by the 1700s, and there are over 100 listed in Canadian phone books. The surname also occurs in Florida and some other US states.) Thanks to Kathleen O’Brien at Natural Resources Canada for this information.

In the Ile-Perrot district of Montreal, no date known.