Current streetname. Today, Montpelier Road in Devonshire Parish is home to the Arboretum, one of the most tranquil oases in Bermuda. This open space, created by the Department of Agriculture, Fisheries and Parks, is home to a wide range of Bermudian plant and tree life.

Surprisingly, in all there are (or have been) up to fifteen locations in Jamaica called Montpel(l)ier, of which the one in St James parish is the largest and best known. It appears that all were originally plantation estates, though dates and other details are hard to find for some of them. Some of these estates may have undergone changes of name or simply fallen into disuse. The popularity of the name is unexplained; in one case there is a hint of a direct French connection (see Port Royal) but I suggest in most cases the reason is 'healthy reputation' - there are (or were) dozens and dozens of other estate and locality names in Jamaica with a similar value, such as Bellevue, Fairview, Mount Airy, Mount Pleasant and so on.

Estate and settlement in St James parish. The largest and best known of the Jamaican Montpelliers. Origin: a sugar plantation settled c1739-40 by Capt Francis Sadler, and first recorded as Montpellier Plantation in 1742. Probably named by Sadler, who may have found in this upland valley away from the coastal swamps ‘some resonance of its namesake in France’ (Higman, 1998). Sometimes known as New Montpelier. After Sadler, the estate was long owned by the Ellis family, succeeded by de Walden. In 1840, Montpelier Estate extended to 2372 acres, and the adjoining Montpelier Pen was 4759 acres. Railway station opened 1893. The original sugar estate house burned down some years ago. Property now owned by National Commercial Bank and planted in citrus. Site of archaeological excavations carried out in 1970s by Barry Higman and others from the University of the West Indies. History well documented by Higman.

Site in the hills just short of Yallahs (south-east coast of Jamaica). Three National Library of Jamaica refs: St Thomas map number 1402 - dated 1705; St Thomas map number 1273 - dated 1855; map/doc St Thomas - Montpelier, property of George Alpress 1783. Maria Nugent, wife of the then Governor, refers in her 1801-5 Journal to a visit there, describing the house as "most beautifully situated, on a little mountain, and the famous Blue Mountains in the distance. Beautiful trees and shrubs round the house. In short, it is altogether indescribably beautiful." Almanacs between 1811 and 1840 list the estate as being 121 acres, in the ownership of Kean Osborn (died by 1824). This and no. 1 are the only Montpeliers large enough to be listed in Inez Knibb Sibley's 1978 Dictionary of Place-names in Jamaica. Sibley does not advance any special reason for the name occurring on the island.

Site 2 or 3 miles south of Mandeville. National Library of Jamaica ref Manchester map 334 is dated 1684 - earliest of all the Jamaica refs.

Site just east of town of Toms River on A3 road N of Kingston. Estate active by 1811, with 4 proprietors named and extending over at least 300 acres; listed in almanacs at least 1811-40.

Site between Becher Town and Salisbury, south of Ocho Rios National Library of Jamaica ref: St Ann map 677 - diagram dated 1808 shows Montpelier plantation belonging to heirs of George Archer, 457 acres. 1815 Almanac lists Ann Archer as proprietor of Montpelier, but there are no later references so possibly failed or was renamed.

Site a little east of Macca Tree (about 10 miles due north of Old Harbour). Estate of 200 acres, listed in Almanacs from at least 1811 to 1840; proprietors include Witter, Doyley and Groves.

Site a mile or two south of Thompson Town (about 10 miles north-west of May Pen). Estate of some 55 acres, listed under this name from at least 1811 to 1838, proprietors Evans/Howell.

Hill in called Montpelier, near Sligoville up the road from Red Hills. Height 2419 feet. Referred to in article in Jamaica Historical Society Bulletin vol 7 no 16 1980 p222

Large estate (over 3000 acres) called Montpelier, listed in Almanacs 1811-40 as being in the ownership of the Swaby family.

Estate called Montpelier, in existence at least 1811-33 (Almanacs); various proprietors during this period (Anderson, Hinde, Lynch, Whittaker), but not listed in 1840. Probably not very large.

Estate in existence from at least 1811 to 1815 (Almanacs), in proprietorship of John Blackburn; undated reference at National Library of Jamaica in old map, St Mary number 128.

Estate of 324 acres called Montpelier, in existence from at least 1811 to 1840 (Almanacs), latterly in proprietorship of Hine family.

Estate called Montpelier, referred to only in the 1824 almanac; owner J P Levy held this property, as well as others called Carlsruhe, Pond Piece, and Trafalgar. An earlier Montpellier connection with Port Royal is revealed in an old monumental inscription in the Cathedral, at Fort Augusta, Green Bay:

"HERE LYES THE BODY OF LEWIS CALDY ESQR, WHO DEPARTED THIS LIFE AT PORT ROYAL, THE 22d DECEMBER 1739 AGED 80 YEARS. HE WAS BORN AT MONTPELIER IN FRANCE, BUT LEFT THAT COUNTRY FOR HIS RELIGION, AND CAME TO SETTLE IN THIS ISLAND, WHERE HE WAS SWALLOWED UP IN THE GREAT EARTHQUAKE IN THE YEAR 1692, AND BY THE PROVIDENCE OF GOD, WAS BY ANOTHER SHOCK THROWN INTO THE SEA, AND MIRACULOUSLY SAVED BY SWIMMING UNTIL A BOAT TOOK HIM UP: HE LIVED MANY YEARS AFTER IN GREAT REPUTATION, BELOVED BY ALL THAT KNEW HIM, AND MUCH LAMENTED AT HIS DEATH.

(The date of death was actually 1736.) Mr. Galdy was an affluent merchant of Port Royal, Member of Assembly for St. Mary, 29th December, 1707; for Port Royal, 4th January, 1708-9; for St. George, 17th April, 1711; for Port Royal, 17th September, 1716, and for St. Anne, August 1, 1718, besides sitting in other Assemblies for which there are no returns. Mr. Galdy probably exaggerated the circumstances of his escape, especially as there was no one left to contradict his statement. From "Monumental Inscriptions of the British West Indies," by James Henry Lawrence-Archer [1823-1889], published 1875

15?) Montpelier on the Westmoreland 5 map

The National Library of Jamaica also has a reference to Montpelier in another old map - Westmoreland 5, dated 1819 - Montpelier is shown as belonging to Catherine Gordon and Margaret Clarke [Perhaps identical with others above - some parish boundaries were redrawn.] In the entry for Seaford Town in Place-Names in Jamaica, Sibley says that the town was 'originally 500 acres of Montpelier Mountains owned in the early 19th century by Lord Seaford'. Not yet linked with any of the preceding.

Former sugar plantation and estate, associated with the prominent Herbert family. Situated on rising ground in St John Fig Tree parish on the south of the island, with views to the sea. Here in 1785 Horatio Nelson met his first wife, a young widow named Frances Nisbet, and here they were married in 1787. The house fell into disrepair in the 19th century, and according to a 1907 guidebook, only ruined walls and a gate were then visible. Today, the gate pillars still survive, forming the entrance to a more recent house. The left-hand pillar carries a stone tablet commemorating the Nelson connection. 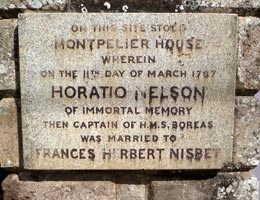 Nearby nowadays is an exclusive hotel, the Montpelier Plantation Inn, developed from the Montpellier estate's sugar works buildings. No-one appears to know exactly how far the name goes back, but a recent academic study (Montpellier Estate, St John Figtree: Contrasting Legacies on a Sugar Plantation  (2010) by David Small indicates that the estate resulted from an amalgamation of other properties by Herbert in the 1770s. The inference is that Montpelier was adopted as the name for the combined holding at about this time. The original Montpelier estate house in which Nelson did his wooing was destroyed by fire or natural disaster in the 19th century, and apparently no depiction of it survives.

Located less than 1 mile north west of Scarborough, Tobago’s capital, is a windmill tower, all that remains of a former sugar estate called Montpelier. Active by 1811, and still running in 1867, it was owned by W Wilson and J Cunningham.

Street name near the windmill tower of Scarborough.

Thanks to Chris Clement of South Carolina for this information.

THE CARIBBEAN : US VIRGIN ISLANDS

Numerous examples of the name from the late 1700s onwards, consistently spelled –pellier.

Summary: The name Montpellier has been applied to four estates (3 large, one small) and one mountain on the US Virgin Island of St Croix. The name is still current today for the sites of two of the larger estates. Generally, St Croix estate names were probably given in the mid-1700s, the period of most active settlement of this island; the first trace of two of the Montpelliers is in a return of 1797. A fuller search of archives on St Croix or in Denmark might produce more detail. It’s not clear why Montpellier should have been a seemingly concurrent name in three separate ‘quarters’ of this one island.

Given the French influence on St Croix, a direct French connection is a possible explanation of the name, but the naming patterns on the island suggest a ‘pleasant/salubrious associations’ motive: other names include Prosperity, Adventure, Jolly Hill, Concordia, Golden Grove, Bonne Esperance, Mon Bijou, Mountpleasant, and Strawberry Hill. The original owners of the Montpellier tracts appear to have English or Danish names, rather than French.

1. Montpellier in Princes Quarter, St Croix, near Frederiksted at the W end of the island

1846: watercolour of ‘Montpellier and Two Friends [ie, Tract no. 6]’ by Frederik von Scholten

1826: sold by auction to Royal Loan Commission (mortgageholder) for Ps 1000

3. Montpellier or Cooper’s Negrobay, in Princes Quarter, St Croix,No. 52 (on south coast, quite a way from PQ No 7)

1856: sold at auction to Dr John A Robertson and wife for 2 annuities

1920s: ridge west of upper course of Adventure Gut, southernmost spur of Bodkin Ridge, St Croix. Presumably so named from 1. above, which is almost adjacent.

From a cultural view, there's a lot of things to do including the Whim Plantation museum (a restored Danish sugar cane plantation), the Botanical Gardens, two Danish forts, the Caribbean Dance Company (West Indian and Afro-Caribbean culture in exciting choreography), The St. Croix Aquarium and Marine Education Center with its newly completed mangrove exhibit, a couple of 1700's era churches, much 18th century Danish architecture, old sugar mills, and a lot more. Some however feel that the best cultural attraction is right in the middle of the rain forest in the Jungle Bar (Montpellier Domino Club) where the famous beer drinking pig (now partaking of non-alcoholic beer only) entertains anyone who’ll buy him a round. A couple of the beach hotels have West Indians nights where guests can see Mocko Jumbies (stilt dancers), broken bottle dancers, and listen to steel pan bands while feasting on West Indian buffets.