Jersey, like Jamaica, is an island boasting multiple Montpelliers – but one of them with a unique origin. 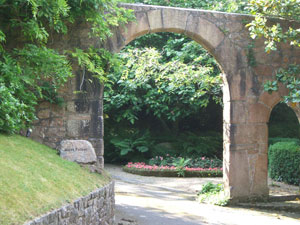 Mont Pellier (very definitely two words) is an old farmhouse in Trinity parish in the north-east of the island. In common with other old Jersey properties, it carries a number of date-stones, the earliest from the 1640s when it was possibly in the hands of the Grandin family. It passed later to the Pellier family, from whom it takes its current name. According to Joan Stevens, in her book ‘Old Jersey Houses’, the Pelliers came on the scene at this site in 1706, when one Daniel Pellier carved ‘DPL’ and the date on a stone now in a later outhouse. [picture and further info at The Jersey Datestones Register] The Pelliers were French refugees and it is likely that the first to be mentioned in Jersey was an Isaac Pellier in 1705. Though the site does not obviously justify the description ‘mont’, the lane running past it has a gentle rise, and in the opinion of local historian Jean Arthur, it is very likely that the name was a play on words – perhaps originally Mon Pellier, understood as Mont Pellier by others.

The lane is now called Rue du Mont Pellier, the ‘du’ clearly marking the fact that this isn’t a regular Montpellier.

Montpellier, Grouville parish. This is a house in the Gorey district, known to have changed hands under that name in 1887, when a Seymour Ward bought it from William Penn Cox. It appears this is a residential property, with no known links to the preceding. Exact reason for the name is unknown.

Montpellier, Beach Road, St Saviour parish. This mid-to-late 19th-century house, of 3 storeys and 2 bays, is listed in the Jersey Register of Historic Buildings, and is typical of Victorian terraced properties in the area. It’s located, as the name suggests, very near the sea. Other properties in the road are named Sunrise, Victoria, Swiss Villas, Valetta, Palmyra, and Khartoum Villas. By and large this area appealed to the increasing number of ex-military Englishmen and their families who began settling in Jersey in the mid- 19th century. It can be surmised that proximity to the sea, and a salubrious setting, led to the choice of name.

Many thanks to Anna Baghiani at the Société Jersiaise for research supporting these entries.